In today’s technology world, on average, every candidate goes through 2-3 rounds of face-to-face job interviews before getting hired.

Sometimes these rounds increase to ensure the right hiring, that is choosing the best suitable candidate to save further resources and speed up the work. A similar three-round job interview in an organization once looped in an exceptional candidate. 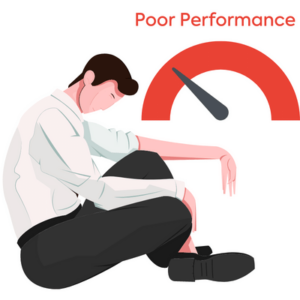 “The very first interaction was impressive and seemed honest,” remarked the department head. “I really liked his confidence, all smiling, and good-natured ”, added the senior interviewer. The HR admitted, “As long as he was not lying about the reason for his previous resignation, I am satisfied with this interviewee” and they all roundly concluded that they have got their ideal match.

Zooming out from the past, zooming in to the present. The supposedly ‘ideal candidate’ chosen from a huge pool of candidates, turned out to be just another average candidate, delivering low or no significant output. What the 3 rounds of strict interviews could not filter were genuineness and truthfulness. The ‘exceptional candidate’ was no more than a bad hire.

What Happened To The Talent Recruiters? 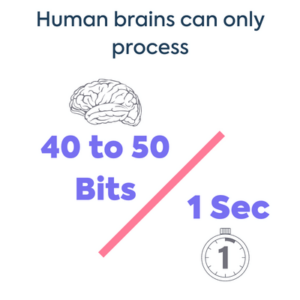 It is natural for the hiring team to fall short with respect to a few inevitable decision-making traits. This is because human brains can only process 40 to 50 bits of information a second out of the eleven million bits that our senses register. To pinpoint a particular cause for an irrational decision can be difficult, but it is not impossible. Here are some possible reasons for picking the wrong candidate in the case above. 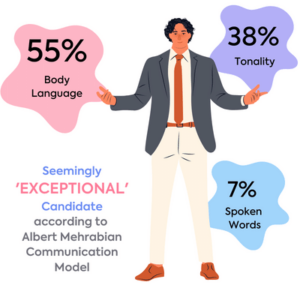 But, How Are These Biases So Effective?

According to Albert Mehrabian, more than 50% of human communication is conducted non-verbally. Which means, we tend to lean on gut feeling, vibe, and past experiences to interpret any events we come across. Bias in this case of the supposedly ‘ideal candidate’ can include anything, such as his politeness, tonality, gestures, or his posture!

Why Would The Candidate Lie?

There can be many reasons why candidates choose to lie. It can either directly or indirectly be their desire to get the job. It could also be their false confidence of being able to cope with the required skills after getting appointed. Or the fact that whatever they state cannot be verified or cross-checked by the interviewer. And so, they can blatantly exaggerate their statements.

When Do Candidates Lie?

Now, preparing for an interview beforehand is very common for job applicants. This candidate did so too, in fact, very impressively. He did so with the persona of self-presentation, rather than his own genuine potential. This is because ‘anything’ is possible while expressing oneself during an interview, and recruiters don’t know what that possible ‘anything’ is on the candidate’s side. To keep a long story short, candidates lie in the absence of scientific assessments.

Traditional hiring practices allow candidates the liberty to falsify their statements and manipulate the very human biases of these hiring managers. To learn more about such flaws and their solutions, read our latest blog ‘Unconscious And Conscious Biases In Hiring Process’.

You can also get a copy of our E-book that introduces an abundance of possible hiring biases from the perspective of recruiters’ as well as the candidates themselves. It helps you analytically revisit your experiences in a job interview hall and rectify them in the future. It also explains the hand of psychometric assessments to reduce hiring biases in real-life situations.